by Admin / Saturday, 17 December 2011 / Published in Events, Everyday Life, Only in the country
Shares

So a couple of our locals came up with a competition to get everyone in the Christmas spirit. A notice went out to everyone, come and join in our Farm Gate Lights Competition.

By friday night we gathered under the tree, our five house town now thriving with people.

We fired up the barbie, cooked a few snags and fed the hungry mass as we waited until it was time to load up the bus!

7.3o we climbed aboard! All the seats were full! (Yes we were a little surprised at the great turn out) So then we were left in our wonderful drivers hands. Thanks Tess for the use of your bus and being our driver…we were louder than your average bus run!!

On our way we had a rough floodway to navigate but lucky our bus-hostess, Mark, guided us to the exits, our crash position and where the gas masks would fall from. (There is always one in the crowd!) 🙂 🙂

Our first stop, which took us twenty minutes to get to, was Uralla Farm. Kids crammed out of the bus to see the lights to the sound of the generator in the background. The bus was also needed to light up the sign on the right. It was so exciting to see their driveway so bright. 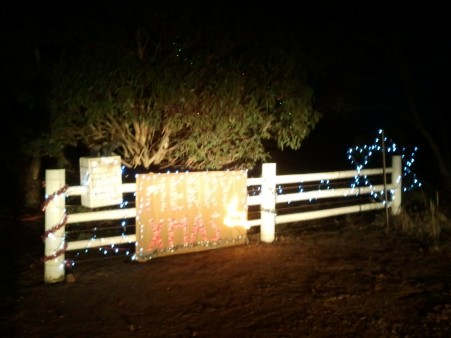 Then it was time to fit back on the bus and head to the Murray’s farm gate, with a very loud 3 cheers for Jensen’s lights. 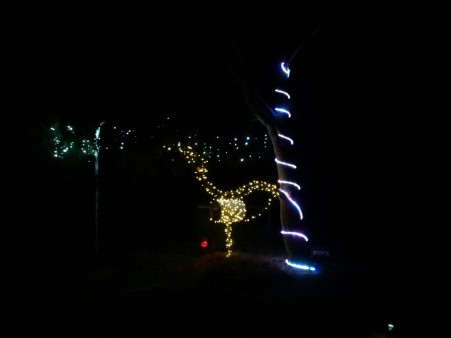 As we arrive the bus occupants made a collective ‘oooh’ as we saw the lights. The kids bus shelter was covered in lights and ‘blow up’ santa was looking great. It looked like you could land a plane with the lights leading down the driveway. On the left side the mail box was covered in lights, holding another santa inside. Eventually we squished back on the bus, making sure no kid was left behind, and had another round of 3 cheers! 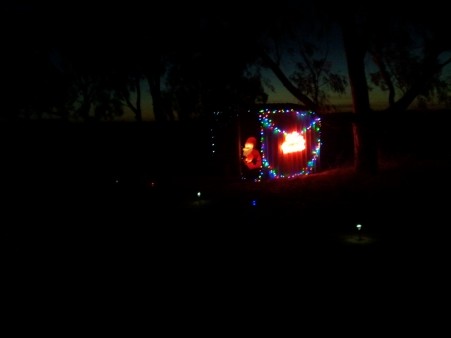 Our third stop was to the Thompson’s farm gate. 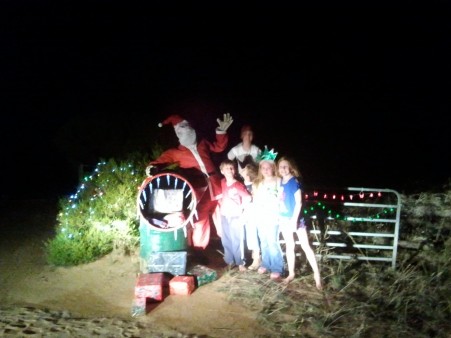 The kids love this Santa, and such a great job. (He was internally made out of wire) Every present that was in and around the mail box was shaken…just in case it was real!! 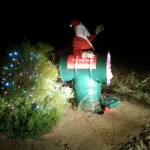 The Thompson’s mail box has just only had a face life, normally white, and just by chance the new paint matched the xmas colours! Well done!

Another round of applause and we headed to our last farm gate, the last three were ‘townies’.

At the Garard’s driveway there was even more surprise and amazement at finding something new. 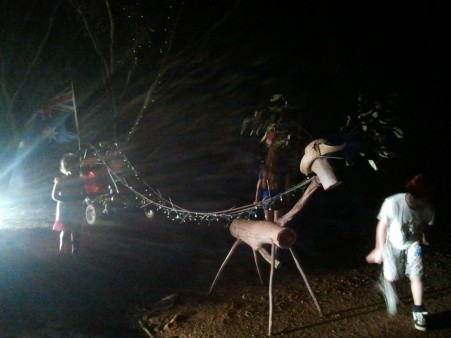 Here we had Santa’s buggy being pulled by a lone wooden reindeer. (Not sure who made the reindeer, maybe it was the only log they had?!?!) 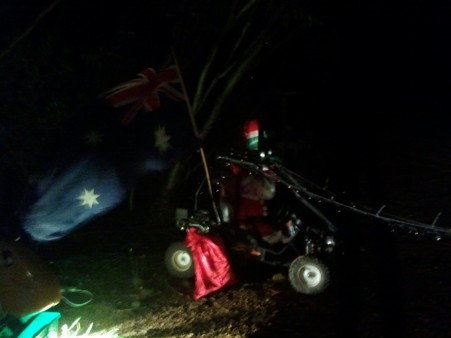 Next we stopped at the old school house. There was a few complaints that they shouldn’t be included because they had power sources!!!

And ours was next.

And the last house I didn’t get a photo because up on their roof with their lights was the REAL santa!! He was all dressed up and walking across the roof. The kids went wild, screaming at Mrs Silver to turn her bus around!!! But by the time we got back there he had gone. Must have been checking out the chimney.

We pulled back in under the tree at nearly 9pm, the bright lights from the fire truck flashing like we had a night disco on, and we all fell out…filed out. But only after we had all voted for the best one. The winner will be announced tonight at our local Christmas Tree.

It was a fantastic night, filled us all with Christmas cheer and excitment. I’m sure next year we will have a bigger and better comp, with folks already thinking about what to do! (We might need a few more vehicles to get around in too)

It’s amazing what you can do with a generator and an imagination. Well done to you all!! 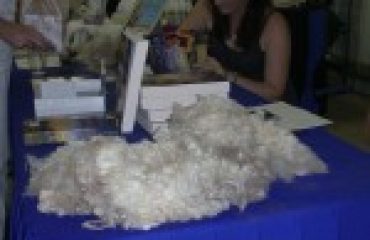 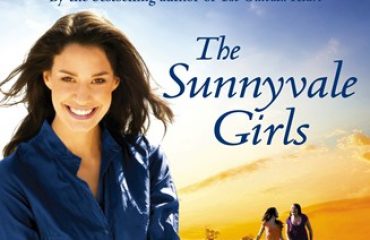