Last year’s competition was so awesome that we just had to hold it again. After a very hot day (up to 40) we all gathered at the ‘Tree’ for a sausage sizzle while we waited for the sun to set. Here is just a few locals gathered around, the blokes (as usual) were positioned around the back tray of the utes. That way they had somewhere to put their stubbies when they’d finished. (And some poor bugger took home a rattly ute lol) 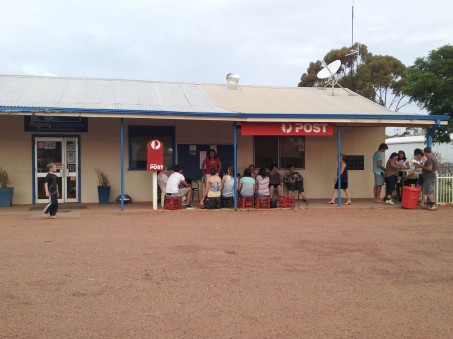 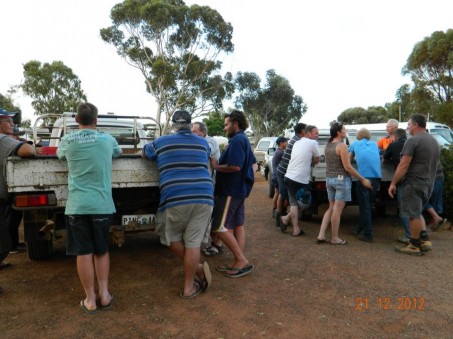 When it was dark enough we all loaded into the Silver’s bus (thanks Tessa for the loan & for driving the crew of excited locals around!) as well as a few extra full car’s, we headed off to the first stop. (This event took 2hrs, with 6 farm gates to view) Lots of gravel driving!

At our first stop you could see some lights but it wasn’t until on closer inspection that you could take in the details! Santa’s red little mini moke! 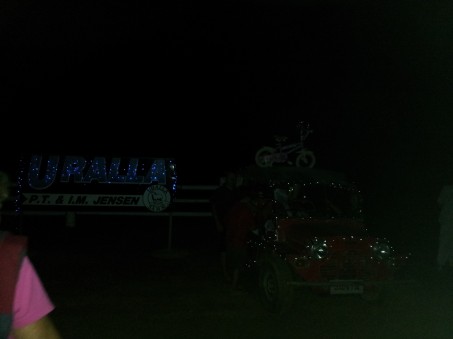 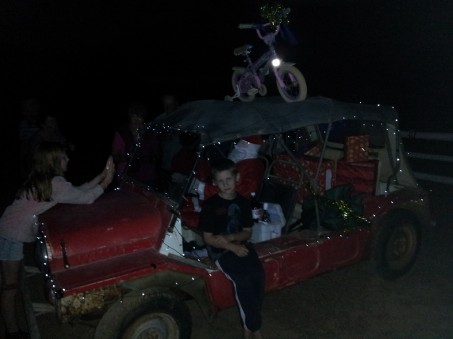 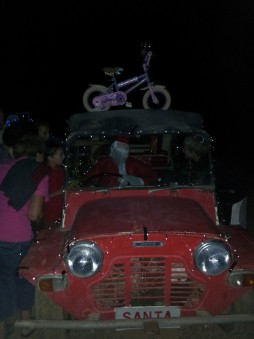 His little red bus was loaded with presents! Even Santa had his own esky on the passenger seat!! Classic.

Next, further up the road, through the gravel dust was Turrama! Tin kangaroo’s and Santa with his head over the farm sign made a great impression. 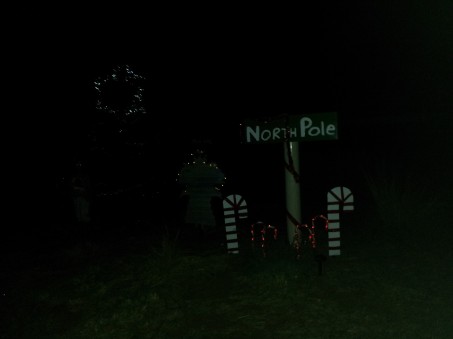 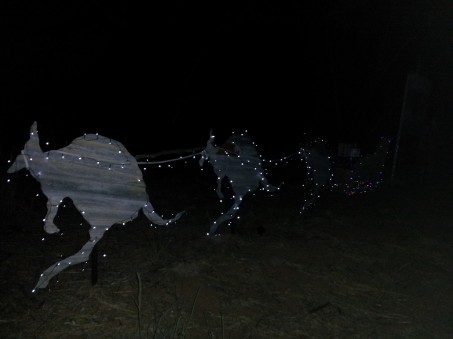 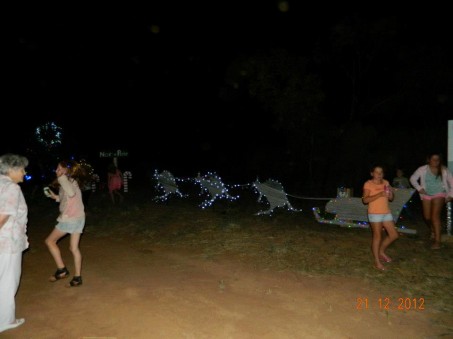 With a short drive around the back roads (the Yogi bus went first to scare away the roo’s) we got to Murray’s driveway. 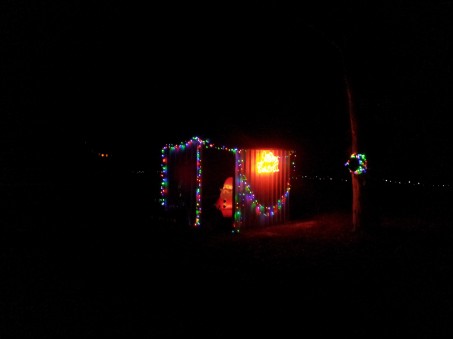 I know from doing many mail runs that right by this mail box is a huge ant’s nest and it is why we take the Murray’s mail straight to their door. While all the kids and adults where wandering around (right over the big nest) I was hoping the ants were heavy sleepers!

Then we took a trip to Thompson’s, last years winners. They stepped it up a notch with Santa on a bike! 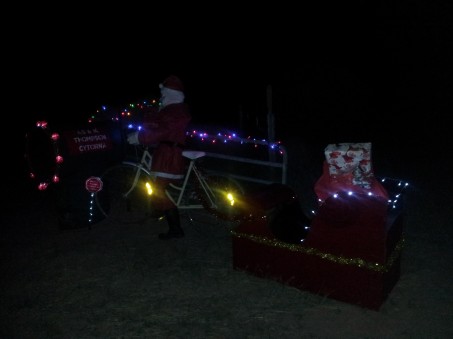 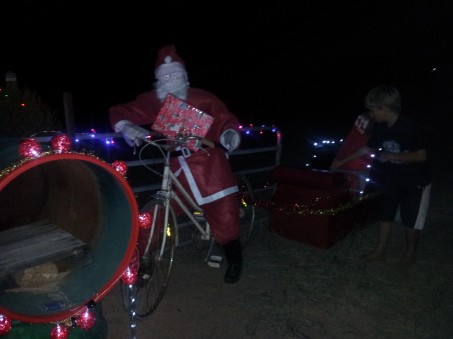 I have it on good authority that ‘some’ of these were done just moments before we left! Not bad considering. We left Santa to ponder how far he would get on his bike (no wonder he was a skinny santa) and drove off to a new entry by the Robinsons/Stewarts. This one had lots of tinsel and would have looked great in the daylight also. 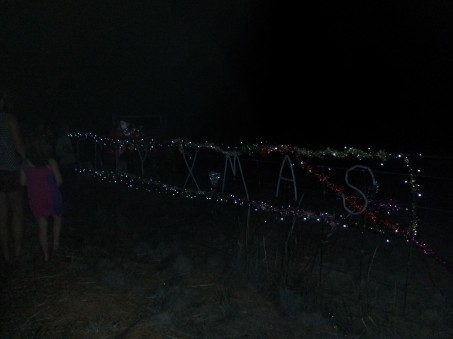 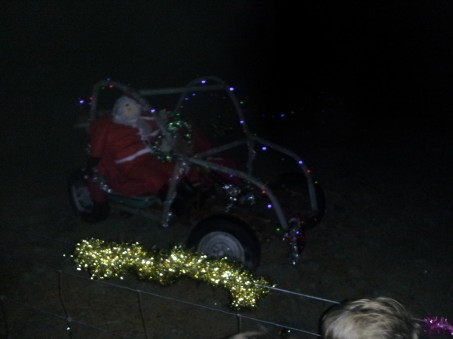 Vehicles were a great hit for Santa this year. The next one I didn’t get to but the reports from my kids said Santa was in a tiny red car and presents were pouring out from every window. Last stop was back where we started at the ‘Tree’. This is the one myself and my neighbours worked on together. Joint effort and joint set of lights! We turned our favourite watering hole into an oasis. We like it so much it might just have to stay up. (Just so long as they don’t use our power to run it lol) 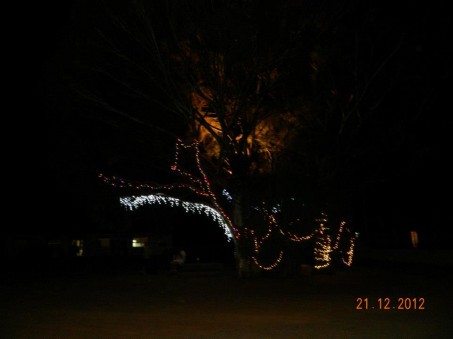 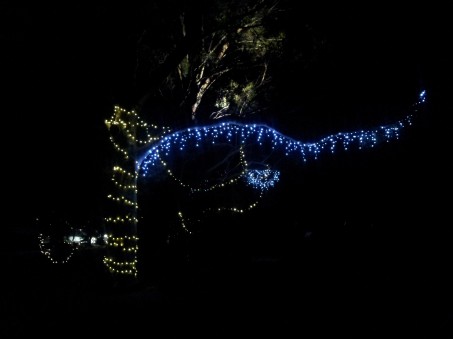 And the winner this year was the Murray’s. Our Tree display only got one vote haha. But at least it can be enjoyed all year round! I hope you enjoyed these photos, for they were sure hard work putting them into this post! (So many buttons to click and I can only get one or two photo’s at a time. Maybe I need more help??)

So from me to you – I hope you all have a fantastic Christmas! It is a wonderful time to spend with your loved ones, appreciate the good things in life, the smiles on kids faces and the amazing food! Thank you all for following along with me, and for loving my stories. I was hoping to share with you all my new cover for The Sunburnt Country….but it hasn’t arrived yet. Keep a look out on my facebook page because the moment it’s okayed I’ll put it up there to share. 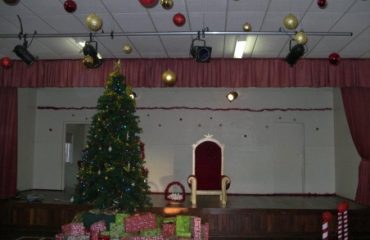